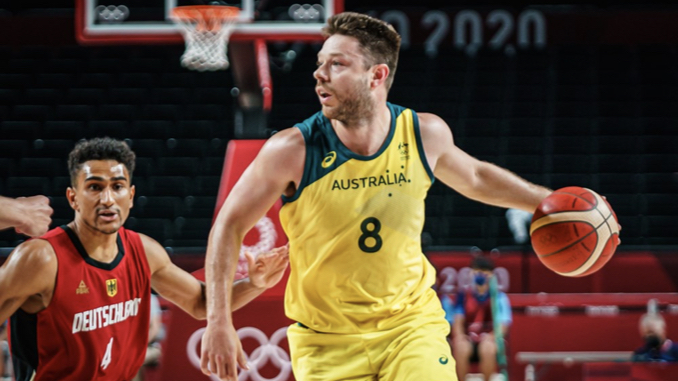 Australia recorded an 89-76 victory over Germany, its third straight win in the men’s basketball at Tokyo. For all your Tokyo 2020 coverage, stay tuned to The Inner Sanctum’s Olympic hub and the Olympics Central.

With each side coming off a win in their previous match – Australia’s an 86-83 victory over Italy, while Germany defeated Nigeria 92-99 – the Boomers were looking to complete the group stages unbeaten, while Germany was aiming to grab a second win of the tournament and secure a spot in the quarter-finals.

Australia was also entering the match without centre-forward Aron Baynes, whose Olympic campaign was cut short during the week due to a neck injury.

The Boomers made a fast start, Jock Landale winning the tip-off and just a handful of seconds later drilling a three-pointer with the first shot of the game to get the scoring underway.

He’d follow it up with the second score of the game a couple of minutes later after the sides weren’t able to capitalise on a handful of shots between them.

Germany got on the board shortly after with a two-pointer and then a pair of free-throws, before gaining the lead 7-5 courtesy of a three-pointer to Maodo Lo.

The teams tussled for the next few minutes before Germany edged further ahead, but the Boomers responded immediately to reduce the deficit back to two points.

Patty Mills then hit a three for the Boomers to regain the lead with just over three and a half minutes to play, but it was Germany who controlled the scoring tempo, with seven points in the next minute of play to skip out to a six-point lead.

Australia reduced Germany’s lead to as many as three points with a minute and a half remaining in the quarter, thanks to a two-pointer and the ensuing free throw after Dante Exum was fouled following a classy finish in the paint.

Germany extended its lead again to as many as seven points with 19 seconds left in the quarter, before a Chris Goulding three-pointer on the buzzer reduced the deficit for Australia back to 4, the quarter-time score sitting at 18-22.

Germany immediately extended its lead at the beginning of the second quarter back to seven points, thanks to an early three-pointer from Joshiko Saibou.

But the Boomers chipped away at the deficit, Patty Mills’ second three-pointer of the game drawing the Aussies back within three points early in the piece.

Back-to-back scores for Nic Kay – either side of a Danilo Barthel three for Germany – and then a converted free throw brought the Boomers back to within a point, before they would take the scoring ascendancy as the minutes ticked down.

A scintillating piece of play on the fast break for the Boomers saw Patty Mills put them in front for the first time in the quarter, before the scoring continued.

Consecutive field goals to Nathan Sobey, Mills, and then Sobey again put the Boomers up by four points with a few minutes still to play, before Jock Landale and Mills scored six points between them in just over a minute to give the Boomers a five-point lead late in the half.

Germany would come within two points again, before a Nic Kay shot on the buzzer went through to give the Boomers a four-point lead at the half.

Marvellous McKeown does the double at Tokyo 2020

Australia returned after the main break with a bang, Patty Mills beginning the scoring with a two-pointer, before converting an off-balance three-pointer and the ensuing free throw.

It gave the Boomers a then match-high lead of ten points just a minute into the second half, but this didn’t deter Germany, which would recover the entire deficit after a series of missed shots from the Boomers.

Germany, however, was unable to edge ahead again, despite drawing level multiple times, with the Boomers through dunks from Matisse Thybulle and Duop Reath showcasing some excellent athletic prowess on the fast break.

The scoring continued again for the Boomers, going seven points up late with less than two minutes in the quarter thanks to a Jock Landale three-pointer, before a buzzer-beating lay-up from Matisse Thybulle retained the 7-point lead into the final break for the Boomers.

Joe Ingles scored his first points of the game early in the last quarter, making no mistake from the corner after missing a shot just seconds prior. This put the Boomers ten points up again in the last, setting the tone for the quarter.

Ingles would continue the scoring a couple of minutes later with another three, as Germany continued to threaten but struggled to reduce the Boomers’ lead.

Patty Mills continued the three-point barrage with another – his fifth for the game – keeping the Boomers’ lead at eight with three minutes played in the quarter.

Germany drew back within five points again shortly after, courtesy of a three-pointer from Andreas Obst, but the Boomers continued to convert.

Field goals to Patty Mills, Nic Kay and Jock Landale extended the Boomers’ lead past ten points for the first time in the match, an 11-point lead part-way through the quarter courtesy of some efficient and accurate shooting.

Kay again returned the lead to 11 points after Germany converted a couple of free-throws, but three consecutive missed shots for Germany meant it was unable to convert its offensive pressure.

Kay was the man for the Boomers again shortly after, his 15th and 16th points of the game putting the Boomers’ lead out to a near-unassailable 13 points with a couple of minutes remaining.

It was then an all-too familiar tale for Germany, as it again missed consecutive shots – this time five, with four of them three-pointers – in the space of 20 seconds before finally managing to score thanks to a pair of free throws to Johannes Thiemann.

The final points of the game went to Jock Landale, who converted the assist from Nathan Sobey with just over a minute left, as the Boomers ran out the game with the final margin 89-76.

For the Boomers, it was Patty Mills who again lit up the Olympic stage with 24 points, five three-pointers and six assists, while Jock Landale was again commanding with 18 points, three rebounds and three assists.

Nic Kay was fantastic as he replaced Aron Baynes in Australia’s starting lineup, with 16 points, four rebounds and four assists.

Andreas Obst led the scoring for Germany with 17 points and five three-pointers, while Johannes Thiemann scored 11 points to go alongside his nine rebounds.

With the group stages complete, the Boomers finished atop Group B, while Germany faces a nervous wait as to whether it has qualified for the quarter-finals.