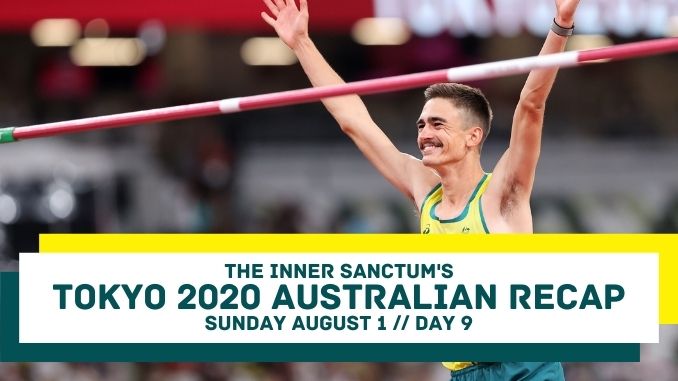 Day Nine of Tokyo 2020 was a golden day for Australia, winning four gold medals in the most prolific day in its Olympic history.

It was a golden day for Australia on Day Nine of Tokyo 2020, with four gold medals the most in a day in Australia’s Olympic history. Keep up to date with all the happenings at Tokyo 2020 through The Inner Sanctum’s Olympic hub and Olympics Central.

Sunday was the final day of the swimming competition at Tokyo 2020, and it was a familiarly productive day for Australia.

Emma McKeon was the story of the day, becoming Australia’s most prolific Olympic athlete of all time as she added two gold medals to her Tokyo tally.

It was Olympic veteran Cate Campbell who led the Aussies to victory in the relay, recovering a 0.12-second deficit at the turn of the final 50 metres to power Australia to an Olympic record.

Australia also finished fifth in the men’s 4×100 medley relay, rounding out the competition in the pool at Tokyo.

The nine gold medals in the pool at Tokyo became Australia’s most at any Olympic Games – behind the eight won at the 1956 games, also drawing level with the 20 at Beijing 2008 for its most overall medals in swimming at an Olympic Games.

Logan Martin made history in the men’s BMX freestyle on Sunday afternoon, becoming the world’s first-ever Olympic gold medallist in the event.

Martin entered the final as the first seed following scores of 91.90 and 90.04 in the seeding round on Saturday and needed only one run to seal the world’s first-ever Olympic BMX Freestyle gold medal.

Martin scored a whopping 93.30 from his first run, 2.80 points ahead of the next best in the competition, as his second run was essentially a victory lap.

It adds to his already full trophy cabinet, an excellent achievement that showcased the best of one of the new additions at Tokyo 2020.

Coming into the leg round of the men’s one-person dinghy Laser race, Aussie Matt Wearn held an unassailable – or perhaps un-out-sailable lead – over the competition.

But instead of cruising through the round, he finished second, adding a touch of dominance to his victory – which became Australia’s third consecutive gold medal in the men’s Laser event.

Wearn finished the competition on 53 points – 29 points ahead of the eventual silver medallist – sealing Australia’s fourth medal of day nine.

Kookaburras shoot through to hockey semi-finals

Australia’s men’s hockey team played its quarter-final against the Netherlands on Sunday afternoon, after the Kookaburras emerged undefeated from the group stages of the competition.

It was a tight tussle with just one goal in the first half, which went to the Kookaburras before the Netherlands got on the board in the third quarter as the Kookaburras maintained their lead.

The Netherlands equalised in the last, with the Kookaburras threatening to score in the final minute, but the four quarters would ultimately end with the scores tied up at 2-2.

It was here that the competition heated up, with the game going to a penalty shootout. Where at one end Kookaburras keeper Andrew Charter defended resolutely, at the other the Kookaburras strikers were crafty in offence, sealing the game in three shots, with the Netherlands failing to score.

The Kookaburras move onto their semi-final against Germany, which will take place on Tuesday.

Read more about the Kookaburras’ quarter-final win here: Kookaburras soar to the semis in penalty shoot out

Beach volleyballers set for the quarter-finals

Australia’s women’s beach volleyball pair of Mariafe Artacho del Solar and Taliqua Clancy qualified for the quarter-finals of competition, after a straight-sets win over China’s Xue Chen and Wang Xinxin on Sunday night.

The Aussies won the first set 22-20 before taking the second set 21-13, completing the win.

Their match-up for the quarter-finals is yet to be decided, but they will face one of Canada or Spain on Tuesday as they aim to secure a chance for a medal by qualifying for the semi-finals.

Among the athletics action on Sunday night were three Aussies competing in the men’s 800m event.

Charlie Hunter, Peter Bol and Jeffrey Riseley each competed in a semi-final, Hunter and Riseley finishing seventh and fifth in their respective heats.

But it was Bol who eclipsed the lot, placing first in his heat with a time of 1:44.11 – a new Australian record – and qualifying for the 800m final which will take place on Wednesday night.

Remarkably, Bol is the first Australian since 1968 to qualify for an 800m final, qualifying fifth-fastest for the final.

He’ll start in lane eight on Wednesday night, but after looking relatively unbothered in his strong finish, and drawing some high praise from commentator Bruce McAvaney, he’ll be one to keep an eye on come the final.

Competing in the final of the men’s high jump on Sunday evening, Brandon Starc captivated the attention of the Australian public with a brilliant performance.

Starc completed his first four jumps without an issue, comfortably clearing the bar at 2.30 metres.

He stumbled slightly at the next interval, but pushed through, completing the jump at 2.33 metres on his third attempt. He cleared the bar again at 2.35 metres the first time around, as the competition began to heat up.

Unable to complete the jump at 2.37 metres, Starc opted to take it to the next interval, where at 2.39 despite a valiant effort his efforts were cut short.

It was a brilliant result for Starc who finished fifth overall and just two centimetres behind the eventual dual-gold and bronze medallists.

He was certainly in the heat of competition, however, as his final jump of 2.35 metres would have been enough to net him a medal (including some gold) at every Games since 1988, but a fantastic effort nonetheless by the 27-year-old.

Two more semi-final rounds on Sunday night saw Rohan Browning and Liz Clay striving to qualify for the finals of their respective events.

Browning, who captivated Australia on Saturday night with an incredible first-placed finish in his 100m heat, took to the track in the second semi-final with an eye on the final event later in the night.

A slightly slow start out of the blocks, unfortunately, left Browning with too much to do, but in a brilliant run, he recovered well to finish fifth, just two ten-thousandths of a second off fourth place.

Browning’s run of 10.09 is still a brilliant result for the Aussie, and with the Commonwealth Games looming large in 2022 and the 2024 Olympic Games just three years away, the 23-year-old is a face Aussie athletics fans can get used to seeing on the world stage.

Over in the women’s 100m hurdles, it was Liz Clay aiming to qualify for Monday’s final on behalf of Australia.

After a couple of delays to the start of the race, Clay put in a brilliant run to finish third in her semi-final, with a personal best time of 12.71 seconds an outstanding effort.

Looking in line for qualification with this strong result, it was a heartbreaking end to Clay’s campaign as the third heat saw Puerto Rico’s Jasmine Camacho-Quinn break Sally Pearson’s Olympic record with a scintillating 12.26 to storm into the final.

Unfortunately for Clay, she missed qualification for the final by 0.8 seconds, but with a personal best in an Olympic semi-final, there is plenty to be upbeat about.

Watch The Inner Sanctum’s chat with Liz Clay prior to the Tokyo 2020 Games here.

The fourth and final round of the men’s singles golf began early on Sunday morning, Aussies Cameron Smith and Marc Leishman both competing for Gold.

After a strong few days of competition, Smith finished equal tenth on -14, just four shots behind the USA’s Xander Schauffele who won gold.

Boomers to face Argentina in quarter-finals

After winning their third and final pool match against Germany on Saturday evening, the Boomers have learned their fate ahead of Tuesday’s quarter-finals.

They will face Argentina – who won just one game in the group stages – as the Boomers look to cement a chance to play off for a medal by qualifying for the semi-finals.

Should the Boomers win on Tuesday night (the game will take place at 10 pm AEST), they will face the winner of Spain v Team USA in the semi-final on Thursday.