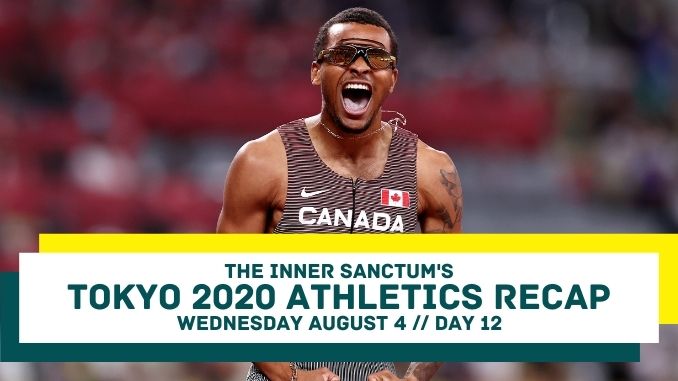 On de track, De Grasse finally gets his gold

After a silver medal finish in the Men’s 200m at the Rio 2016 games, Canada’s Andre De Grasse finally has an Olympic gold to his name.

Second, only to world record holder Usain Bolt at Rio, De Grasse entered Wednesday night’s final as the second-fastest qualifier and among the favourites to take home the title of the world’s fastest man in the 200m discipline.

And it certainly did, the top five finishers all running sub-20 seconds, as De Grasse stormed home to take home the gold medal, setting a new Canadian record in the process with a time of 19.62 seconds.

Second and taking home silver was Lyles and Knighton’s USA teammate Kenneth Bednarek, just 0.8 seconds behind De Grasse with a time of 19.68.

Lyles rounded out the podium, again not far behind once again, running the 200m in 19.74 seconds, while Knighton finished fourth in 19.93 seconds.

Super Bol does Australia proud in the 800m

It was the event that had the whole country watching on Wednesday night, as Peter Bol became Australia’s first men’s Olympic 800m finalist since 1968.

Qualifying second in his heat and first in his semi-final – both with an Australian record – the hype and excitement around Bol heading into the final was immense, and he could hardly have done Australia prouder.

Leading for much of the race and holding his position well, it was only on the final stretch that Bol faltered, finishing fourth in the final, just 0.53 seconds off a bronze medal and under a second behind the eventual gold medallist, Kenya’s Emmanuel Korir.

Korir took home the gold medal with a time of 1:45.06, just ahead of his Kenyan teammate Ferguson Rotich who won silver, with 1:45.23.

Poland’s Patryk Dobek claimed bronze, a time of 1:45.39 putting him onto the podium ahead of Bol.

But the Aussie drew plenty of praise far and wide – from Australia as a nation, as well as some Olympic teammates.

After the incredible finish to the men’s 400m hurdles final on Tuesday, Wednesday’s women’s final promised just as much. With world record holder Sydney McLaughlin and her USA teammate, Rio 2016 gold medal winner Dalilah Muhammad among the competitors, it was sure to be another great spectacle.

And it was the US pair who blitzed the rest of their competition, both finishing with a faster time than McLaughlin’s world record of 51.90 seconds. It was none other than McLaughlin who retained her world record, running an astonishing 51.46 to take home gold. Muhammad finished second for silver, with a time of 51.58, while the Netherlands’ Femke Bol ran a faster time than the previous Olympic record, with a 52.03 to win bronze.

Jamaica’s Janieve Russell finished fourth with a time of 53.08, while Ukrainians Anna Ryzhykova and Viktoriya Tkachuk finished fifth and sixth. Panama’s Gianna Woodruff finished seventh, while the third American in the event, Anna Cockrell, was disqualified.

Heartbreak for Gregson in the women’s steeplechase final

Another Aussie with a shot at a medal on Wednesday night was Australia’s Genevieve Gregson, at her third Olympics, competing at Tokyo in the women’s 3000m steeplechase.

Qualifying sixth in her heat to make the final, Gregson did brilliantly for the duration of the race, before a fall on the final jump saw her unable to finish, taken off in a wheelchair before it was later confirmed that she had ruptured her Achilles tendon.

It was a devastating blow for the 32-year-old, who despite sitting behind most of her competition when she fell, is at her third Games, after finishing ninth in the steeplechase final at Rio 2016 and 12th overall in the women’s 5000m at London 2012.

While it’s a bitter end for Gregson, making consecutive Olympic finals is a brilliant achievement, and her efforts and talents certainly can’t be faulted.

It will be a final in which 11 countries will be represented by 12 athletes, and Australia is the nation with two competitors in the women’s 1500m final, which will take place on Friday night.

Jessica Hull and Linden Hall both qualified for the final on Wednesday night, a time of 3:58.81 for Hull – an Australian record – and a 4:01.37 from Hall sealing their entries.

Finishing fifth and third in their heats respectively, it’s sure to be another event that will captivate Aussie attention with twice the representation – and twice the medal chance in Friday night’s final.

Five down, five to go as decathlon competition heats up

Moloney, 21, amassed 4641 points in the event on Wednesday, sitting only behind Canada’s Damian Warner (4722 points) after the completion of the fifth event.

In third place, Canada’s Pierce Lepage sits just shy of 100 points behind Moloney, on 4529, while another Aussie in Cedric Dubler is ranked 15th on 4184 points.

It was a horror day for Belgium’s Thomas Van der Plaetsen, however, only able to complete one event before badly injuring his knee in the long jump. Despite completing the 100m sprint, it meant Van der Plaetsen was unable to continue or participate in the day’s remaining events.

Thursday will see the 110m hurdles, discus, pole vault, javelin and 1500m round out the decathlon competition, so here’s a look at how the top five and Australians are currently placed after five events (Australians in bold).

Marileidy Paulino of the Dominican Republic wasn’t far behind McPherson’s time of 49.34, with a 49.38 of her own.

Candice McLeod will join her Jamaican teammate in the final, while the USA will have two representatives in Quanera Hayes and Allyson Felix.

Cuba’s Roxana Gomez, Bahrain’s Shaunae Miller-Uibo and Great Britain’s Jodie Williams round out the qualifiers for the final, which will take place on Friday night.

Wednesday saw the finalists for the men’s 110m hurdles locked in, the semi-finals taking place in the morning.

Jamaica and France will both be doubly represented in Thursday’s final, Ronald Levy and Hansle Parchment qualifying for the Jamaicans while it will be Pascal Martinot-Lagarde and Aurel Manga for the French.

Holloway will go into the final as the favourite, with a personal-best time just one second shy of the world record.

Australian Nick Hough missed qualification with a seventh-place finish in his semi-final, finishing with a time of 13.88.

After four of seven events in the women’s heptathlon, it’s the Netherlands’ Anouk Vetter who leads the competition with 3968 points. She’s followed closely by Belgians Noor Vidts (second, 3941 points) and Nafissatou Thiam (third, 3921).

Arguably the biggest story of the day, however, was Great Britain’s Katarina Johnson-Thompson, a medal contender in the event, who suffered a calf injury in her 200m heat and was forced to withdraw from the remainder of the competition.

Despite sustaining the injury while running, Johnson-Thompson continued and finished the race, however, was disqualified for leaving her lane during the heat.

Thursday will see the long jump. javelin and 800m events conclude the heptathlon, so here’s how the competition looks ahead of Thursday’s action.

Poland has taken home two hammer-throw medals, as it claimed gold and bronze in the men’s final on Wednesday night.

Wojciech Nowicki claimed bronze by a comfortable margin, a throw of 82.52m nearly a whole metre ahead of Norway’s Eivind Henriksen who threw a national record of 81.58m to win silver.