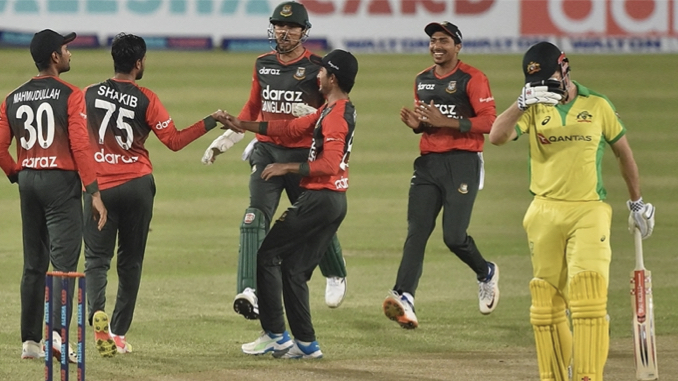 Bangladesh wrapped up a resounding 4-1 series victory against Australia on Monday, handing the Aussies a second T20 series loss in the space of a few weeks.

While the back-to-back tours of the West Indies and Bangladesh loomed as potential fact-finding quests for October’s T20 World Cup, it seems the Aussies have been left with plenty to think about after a disastrous away tour.

The Inner Sanctum looks at the Top 6 talking points to emerge from the 5 match series.

And the wait paid off for the hosts, dominating Australia particularly with the ball in series where the highest innings score was Bangladesh’s 7/131 in the first game, and Australia’s highest was just 7/121, in a game which it lost.

Bangladesh all-rounder Shakib Al Hasan attributed the series win to the motivation drawn from the infrequency of tours by larger cricketing nations like Australia.

“There is always a motivation when you play the bigger teams – normally those which don’t visit our country that often,” Shakib told media following Monday’s fifth T20.

“We had never won a series against Australia, and so this was our chance. Hence, we wanted to deliver well as a unit, which is what happened.”

For Australia, Bangladesh’s team unit, like many opposition T20 teams before them, exposed a key weakness during the series – the Aussies’ ability to play spin, and perhaps more broadly their ability to bat on slow, subcontinental pitches like those in Dhaka.

Australia lost 38 wickets across the five-game series, bowled out twice – including for a record-low score of 62 in Monday’s final match.

Twenty of Australia’s 38 wickets fell to spin bowlers, including eight to Nasum Ahmed and seven to Shakib Al Hasan, both of whom bowl left-arm off-spin.

It was Shakib who did the damage in Monday’s game, with figures of 4/9 at an economy rate of just 2.45 from the 3.4 overs he bowled.

But it wasn’t just the hosts’ spinners who starred with their frugal bowling either, fast bowler Mustafizur Rahman taking seven wickets at an economy of 3.52 across the series.

This lack of dominance with the bat hints that there’s a gaping need in Australia’s lineup for players who can play spin well and survive on slow pitches, and it’s one that, should it be obtained, will hold the Aussies in good stead as the 2021 T20 World Cup takes place in the UAE.

Where does Shakib rank among the world’s all-rounders?

The technical answer to this is second, behind Afghanistan’s Mohammad Nabi on the ICC T20I All-Rounder Rankings.

But after an astonishing series against Australia with both bat and ball, you’d be hard-pressed to find a better all-rounder in the world than Shakib at the moment.

Sitting only behind Aussie Mitch Marsh in the series in the total runs tally for the series, Shakib’s 114 included innings of 36, 26, and 26 that were all pivotal to Bangladesh’s victories – some anchoring and some providing firepower – in their respective games.

He was consistent throughout the rest of the series, with a wicket in three of the first four games, before becoming a match-winner with the ball in the fifth game as Australia was bundled out for a record-low 62.

Shakib’s figures of 4/9 capped off a brilliant individual series and also saw him become just the second-ever bowler to reach 100 wickets in men’s T20s.

Aussie Hundred Watch: Which Australians have smashed The Hundred?

The Top 6 – West Indies v Australia: Where to now for Australia?

Damian Hough: Preparing Adelaide Oval’s pitch and the summer ahead

Australia’s batting depleted, but did anyone really step up?

Australia left for the West Indies sans the key batting quartet of David Warner, Glenn Maxwell, Steve Smith, and Marcus Stoinis, all of whom are certain to feature in calculations for the Aussies at the T20 World Cup this year.

Captain Aaron Finch also missed the series, returning to Australia after sustaining a knee injury against the West Indies.

In their absence, however, the series seemed relatively fruitless in terms of identifying who might be able to make an impact come the tournament in October.

Mitch Marsh topped the run-scoring charts for visitors this series with 156 runs, following his excellent form against the West Indies, registering three of the four highest scores for the series, and was perhaps the only Aussie to stake a further claim to cement or even solidify a spot in Australia’s best T20 XI.

The next highest-scoring Aussie was Ben McDermott, whose 57 runs came in just three games, opening the batting on each occasion.

Dan Christian’s 49 runs – 30 of which came in one over off Shakib Al Hasan – saw him the third-highest scoring Aussie, also from just three games as the remaining batters in the squad failed to have any significant impact.

Matthew Wade (42 runs), Moises Henriques (40), Ashton Agar (36 from four innings), and Alex Carey (35) were among those to play all five games, with Ashton Turner scoring just 21 runs from four innings across the series.

In the absence of the star power of Warner, Finch, Maxwell, Smith, and Stoinis, it was certainly a chance for others to step up – but it looks like Australia will still be needing answers ahead of the World Cup as it fast approaches.

After a strong showing in the series against the West Indies, in which he took eight wickets across five T20s and two ODIs, Josh Hazlewood continued to display his importance to the Aussie T20 outfit.

Hazlewood topped the series wicket-taking despite playing only four of the five matches, with eight wickets at an average of 10.62 across the series. His economy rate of 5.42 was another key feature of his bowling in the series.

It boosts Hazlewood’s stocks immensely for the upcoming World Cup, after he has often been overlooked in calculations for Australia’s T20 side.

Ellis bursts onto the scene with a bang

Another bowler who certainly did his World Cup chances no harm was Nathan Ellis, who debuted as Australia’s 98th Men’s T20 International player in the third T20.

Ellis, selected on the tour as a “traveling emergency” along with New South Wales spinner Tanveer Sangha was called up to the squad as an injury replacement for Riley Meredith. Ellis celebrated his debut in the best style possible, taking a hat-trick from the final three balls of the innings to finish with the figures of 3/34 for the innings.

He joins Damien Fleming as the only two Aussies to take a hat-trick on debut in any form of cricket, and showed plenty of promise in the fifth T20 also, backing up his debut performance with the very tidy figures of 2/16 from four overs.