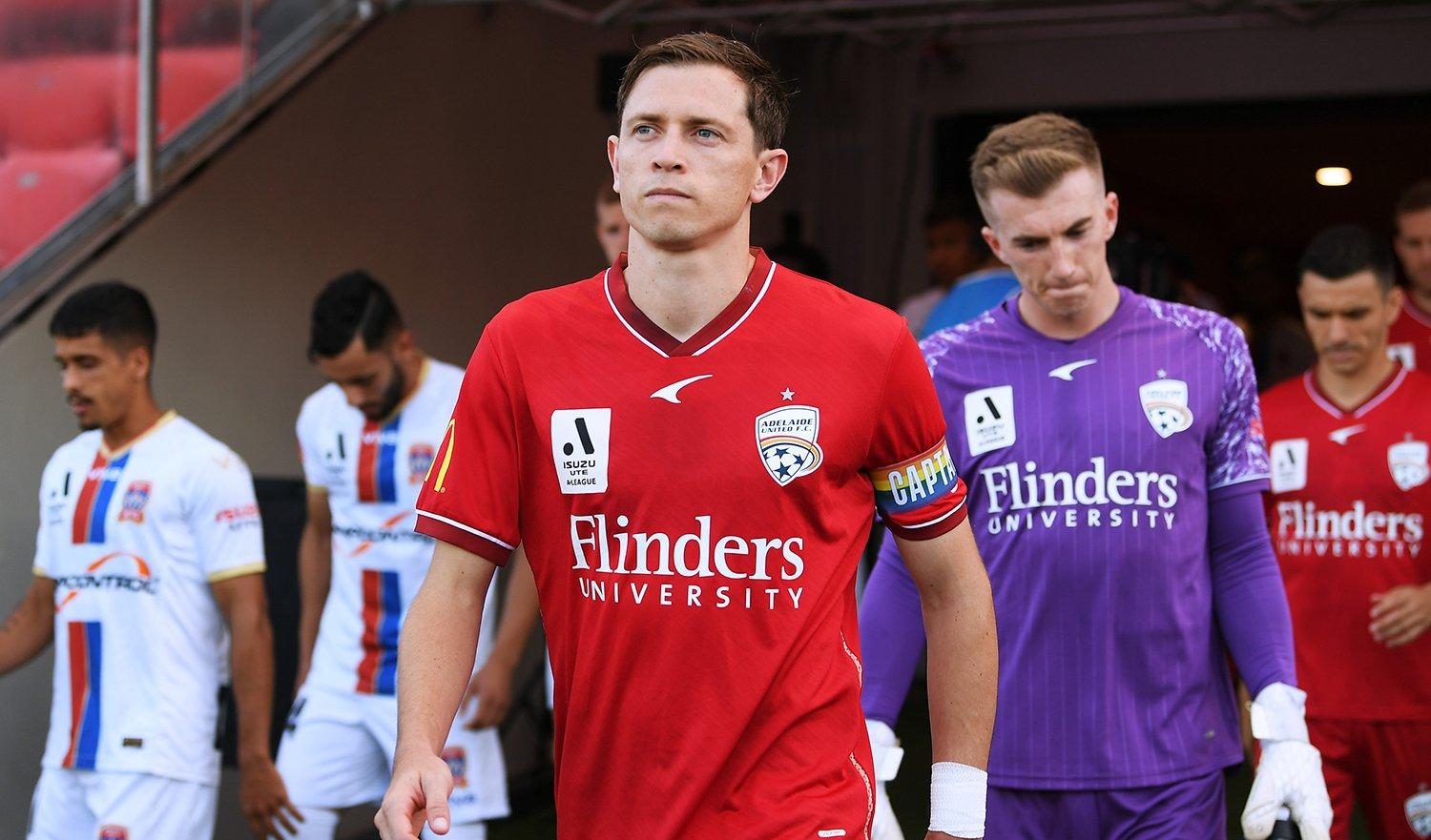 After two starting life as skipper with two wins, a selfless Craig Goodwin is proving why he is the right choice to captain Adelaide United.

Giving the captain’s armband to a player on loan is not a common occurrence in the world of football, but with Stefan Mauk exiting the Reds, Craig Goodwin is proving why he is the perfect fit to lead Carl Veart’s Adelaide United side.

A couple of weeks ago, Adelaide United hosted its first ever Pride Round event and it ended up being an overwhelming success with a lot of hope for the future.

Between celebrating the day’s festivities, the Adelaide United A League Women side clinching finals for the first time in 14 years, and the Men’s side snatching a win at the death against the Mariners, one important moment went largely unnoticed.

Carl Veart had made his decision on the club’s next leader, and a few days before, it officially announced it, it was showcased at Coopers Stadium for the world to see.

84 minutes into the game, outgoing captain, Stefan Mauk, was subbed off in the final appearance of his second stint with Adelaide United to a standing ovation.

When it was time to pass on the baton that is the captain’s armband, without hesitation, Mauk made a B-line for Goodwin, the man who took official on the responsibility of leading the side days later.

Carl Veart has been staunch in his belief that the Adelaide United captain should be South Australian, but the qualities of a leader stretch a lot further than the location of their birth and formative years.

Two games into the job, Goodwin’s reign as a captain has started in positive fashion with two wins. It becomes even more impressive when you zoom in on the man himself, with the club’s choice justified with how Goodwin conducts himself as a player and as a leader.

In his first full home game as captain, against the Newcastle Jets, Goodwin showed Reds fans that his priority is team success over individual plaudits.

Eyebrows were raised when Goodwin lined up on the right wing, the opposite side to his preferred left.

The move was made to accommodate forward George Blackwood who found himself on the wing, an unusual position for a forward who occasionally deputizes in the midfield.

Blackwood is by no means a winger but can put in a shift if requested. Goodwin saw his teammate’s sacrifice and made one himself, ensuring Blackwood was placed in the best situation to succeed.

As a forward, Blackwood is a lot more proficient at cutting in with his preferred right foot and posing a goal scoring threat when playing from the left side rather; rather than playing on the right wing and being limited to crossing the ball, a part of his game that is much less prominent and accomplished.

In contrast, even though Goodwin prefers the left side, he is just as deadly cutting in, with either foot on either side, and punishing opposing defenders. He can even cross the ball with great success when required; Goodwin’s versatility meant that despite a move to the less familiar wing, he was still effective in attack while also giving Blackwood a favorable situation.

Both Goodwin and Blackwood were rewarded for their sacrifice, with the captain leaving the Jet’s defence guessing about what his next move would be on a counterattack on the right wing, something not many A League Men defenders have encountered before.

Three minutes into the game Goodwin was able to bamboozle his markers, who were caught between defending a pass and a shot, before serving the ball on a silver platter to Blackwood who opened the scoring.

Goodwin is not new to sacrifices, gifting a penalty to former skipper Stefan Mauk so he could break his goalscoring drought in Brisbane when the Reds last visited Queensland. Despite the fact that Goodwin had done plenty for his team already, another move eventually contributed to the Reds finding a winner to secure all three points against the Jets.

Fans were left scratching their heads when Ryan Kitto, playing at left-back, was subbed off for explosive winger Nestor Irankunda. The move quickly made sense when Goodwin started heading to the left-back spot, a position he last regularly occupied for the Reds in the 2015/16 Championship winning season.

Goodwin has been quiet adamant in the past that he firmly prefers a spot on the wing rather than at fullback but is happy to do what his coach requires of him.

“I would like to play in that left wing role but different coaches have different preferences. If Gary (Van Egmond) sees me as a left-back, and that is where he wants to play me, I’ll adapt,” stated Goodwin during his time as a Jet.

Sacrifices are nothing new for Goodwin. He may be a Socceroo and a star of the League but what preceded that was rejection and heartache as a youngster that shaped Goodwin as a leader and a fighter.

A professional opportunity for Goodwin did not come in South Australia as a budding young footballer, rejection resulted in him looking for opportunities interstate, specifically, in the NPL Victoria competition before getting his first A Leagues break at Melbourne Heart.

Being a leader requires you to understand the positions of others, and no one understands the struggle of a young South Australian footballer, vying for a chance at the top level better than Goodwin.

It is commendable that someone as close to the Club scoring record as Goodwin is happy to sacrifice his opportunity at glory for the benefit of a 16-year old, but a good captain puts the team benefit over his own personal benefit.

Goodwin performed splendidly at the back and it was his individual brilliance that once again made the difference. Mohamed Toure grabbed the headlines with his late winner, but it would not have been possible without a scintillating early cross from Goodwin from left-back.

There were other, very credible, options to replace Mauk as skipper. Take for example two former Reds captains in Isaias and Michael Jakobsen, along with Ryan Kitto who has been with the Reds since 2016.

Even though they are all capable leaders, Goodwin taking the leadership burden can relieve responsibility for them at crucial moments in their careers.

Both Isaias and Jakobsen are at the latter stages of their playing careers. Isaias has been battling to rediscover the form that made him a fan favorite in the City of Churches, while Jakobsen has been in and out of the lineup as he is fighting to get his body right for the rigors of a grueling season.

Both are proven captains with silverware to back their qualities, but at this stage of their careers the focus is currently at overcoming personal issues that come with age and keeping up with a constantly involving Adelaide United side.

Ryan Kitto has been at the Reds for a long time but it has not all been smooth sailing; only a recent switch from attack to defence giving him his first consistent spell as an undoubted starting XI regular. Kitto has been open about the fact that this has been the most enjoyable spell of his career, suddenly placing the captaincy burden on his shoulders would be irresponsible by the Club and unfair on a loyal servant.

Yes, Goodwin is only at the Reds on loan at this stage, but he ticks all the boxes to be captain. Longevity? Tick! Football quality? Tick! Character? Tick! Internal and external admiration? Tick! The list keeps on going and the time is right.

With his future once again up in the air at the conclusion of the 2021/22 A League Men season, an honor like the leadership of the Club that he has made himself an icon in is an important tick in the pros and cons list when the Goodwins weight up their future.

At the end of the day, Goodwin will make whatever decision is best for himself and his family but one thing remains undoubted, the Adelaide United Football Club and its young, up and coming players, will be better off for having him as a captain, be it for the short term or the long term. 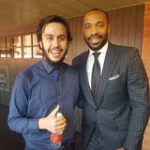