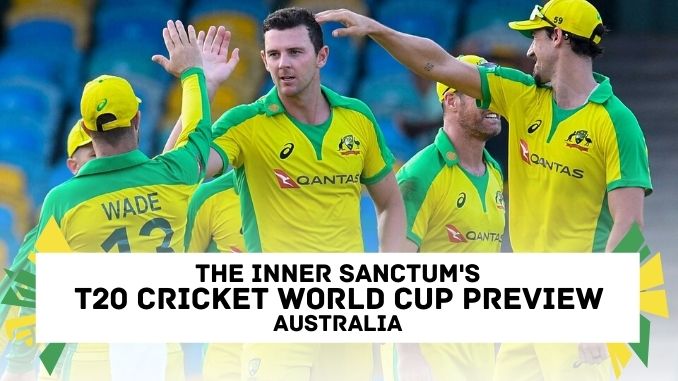 Australia will be hoping to bounce back from recent series losses at the T20 World Cup.

With Australia's campaign in the ICC T20 World Cup 2021 approaching this week, The Inner Sanctum takes a look at what the Aussie squad looks like.

The cricket world has had to wait an extra year, but the ICC T20 World Cup 2021 is finally upon us.

With Australia kicking off its campaign against South Africa on Saturday, The Inner Sanctum takes a look at how the Aussies stand.

Australia enters the competition fresh off back-to-back away T20 series losses to Bangladesh and the West Indies. The Aussies are seventh on the ICC T20I Men’s Team Rankings; a lack of success on their recent tours seeing them fall behind Bangladesh (sixth), while the West Indies are ninth.

Glenn Maxwell’s run of form in the recent IPL season – which also took place in the UAE – is as good a sign as any that he’s ready to fire for the Aussies in the T20 World Cup.

Maxwell’s hot streak spanned five consecutive games for the Royal Challengers Bangalore, in which he scored 56, 50*, 57, 40 and 51.

In national colours, where he’s produced some of his most damaging and dynamic innings, Maxwell is all but ready to star for Australia once again.

His part-time off-spin bowling – which has been match-winning on previous occasions for Australia – will also be a tremendously valuable asset on the low, slow surfaces in the UAE.

On the slow, spin-friendly wickets of the UAE, Adam Zampa’s proficiency in the T20 format will be integral to the Aussies’ success.

He’s the first choice white-ball spinner for the Aussies, and with his wicket-taking ability, combined with his frugal bowling approach, Zampa’s four overs each game will be among the most important for Australia.

Zampa picked up 2/17 from his four overs in the practice match against New Zealand, foreshadowing what could be in store for the tournament.

Josh Inglis’ maiden T20I squad call-up is reward for months of scintillating form in The Hundred and Vitality Blast tournaments during the UK summer. He was the leading run-scorer in the latter, with 531 runs at 48.27, and two hundreds.

Inglis presents a versatile batting option for the Aussies, with the ability to be a damaging opener, a resolute middle-order batter, or a finisher, a skill he displayed with a match-winning eight off two balls in Australia’s practice game against New Zealand.

The form Inglis has displayed in recent times makes him hard not to pick come Australia’s first match on Saturday, and his positional versatility may just net him the ‘keeper spot ahead of Matthew Wade.

Mitchell Swepson has the potential to form a damaging leg-spinning partnership with Zampa, and is likely to be given every chance to during the tournament. Swepson’s slow bowling style will be heavily supported by the pitches in the UAE, and like Zampa, his four overs of bowling will be immensely valuable due to Swepson’s miserly economy.

He conceded just 26 runs from his six overs on Australia’s tour of Bangladesh, including a haul of 3/12, so should he be picked during the tournament, Swepson will be one to keep an eye on for his match-changing potential.

Hazlewood hits the T20 World Cup with the glow of success

The batting depth in the Australian squad is loaded with top-order firepower, but when it comes to the middle order, the Aussies look comparatively bare.

The likes of Aaron Finch, David Warner and Matthew Wade are all excellent openers, but aren’t quite suited to a middle-order role, while Marcus Stoinis is another whose best position is at the top of the order.

Mitch Marsh will most likely occupy the number three position after succeeding in the role against the West Indies and Bangladesh, while the key number four role will likely come down to Steve Smith and Maxwell.

There’s a case either way for Maxwell – that his talent and match-winning ability should be prioritised when deciding the order, but his versatility and explosiveness means some will argue he’s better suited to come in later in the innings when quick runs are needed. The latter view, however, means the risk that he’ll come in too late in the innings and his value will be wasted.

It’s likely that Smith takes the number four position, with Maxwell at five, while Stoinis will slot into the ‘finisher’ role at number six, and can provide an extra bowling option when fit to do so.

With the wicket-keeper role left to be taken after these selections, it’s unlikely Wade would be included in the side if not opening or at first-drop. In the case he’s not occupying one of those roles, Inglis will be able to take the traditional ‘keeper spot at number seven, with the option to slide up the order if the selectors opt to bat Stoinis lower or select Ashton Agar ahead of Stoinis.

It’s a debate that will likely be ongoing, but the need to pigeon-hole some players into their non-preferred positions has the capacity to backfire.

Do Smith and Warner have futures in the Australian T20 side?

The star test duo of Smith and Warner both fell victim to the axe during the recently concluded IPL season, playing two matches each in the UAE leg of the tournament.

Warner’s case seems to be the most interesting, stripped of the captaincy at the beginning of the IPL season and dropped from the side altogether twice – including for the majority of the second instalment.

He recorded a golden duck in Australia’s practice game against New Zealand, and with a handful of the batters in the Aussie squad able to open, could be on borrowed time should he fail to perform.

Smith, on the other hand, scored a team-high 35 in the practice game against New Zealand, but was overlooked by coach Ricky Ponting for the Delhi Capitals in the UAE leg of the IPL.

It’s arguable that Smith’s batting style isn’t quite fast-scoring enough for the T20 game, though his innovation could be a valuable piece of the puzzle that is Australia’s XI.

Like Warner, Smith will most likely start the tournament in the lineup and the number four batting spot, but should he fail to perform, could be overlooked as well.