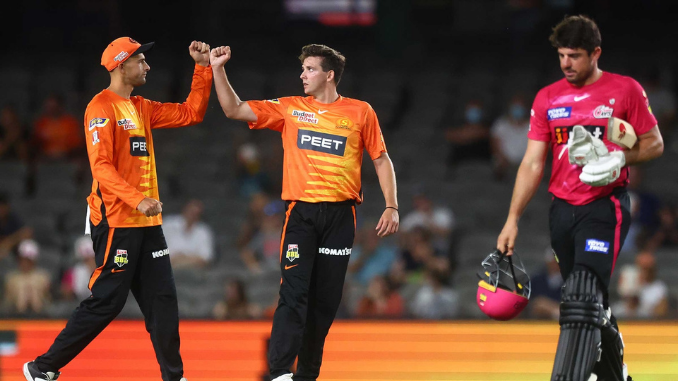 The Perth Scorchers have reached their seventh BBL final, and will be looking to claim a fourth title. Image: cricket.com.au

The Perth Scorchers secured their seventh BBL Final berth on Saturday night, but who is their ideal final match-up?

The stand-out team of BBL|11, the Perth Scorchers secured their seventh BBL Final berth on Saturday night with a convincing 48-run victory over reigning champions the Sydney Sixers.

Batting first at Marvel Stadium, the Scorchers put the pressure on their opponents from the get-go, a 120-run opening stand between Josh Inglis and Kurtis Patterson propelling them to 3/189 from their 20 overs.

A similarly commanding bowling performance from the Scorchers saw the Sixers put on the back foot from the beginning of their innings, losing three wickets inside the powerplay, and slumping to 7/55 by the conclusion of the 12th over.

Number nine Ben Dwarshuis provided an entertaining cameo with the bat, slamming 66 from 28 balls, however it was too little, too late as the left-hander was the last wicket to fall for the Sixers at the beginning of the 20th over.

The Scorchers’ win takes them to their seventh – and second consecutive – BBL final, where they’ll have a shot at claiming a fourth BBL title, an opportunity to become the outright most successful franchise in BBL history.

With three additional teams remaining in the BBL|11 season, here’s a look at which of the sides would be the Scorchers’ ideal BBL Final match-up.

The Scorchers’ match-up for the final will be one of the Adelaide Strikers, Sydney Sixers or Sydney Thunder, to be determined across the Knockout and Challenger fixtures on Sunday and Wednesday respectively.

Their records against the Strikers and Thunder are even, with 10 and seven wins apiece.

Interestingly, and perhaps most tellingly, however, the Scorchers’ best chance at a fourth title could come against the Sixers, the side against whom they lost the final last season in BBL|10.

The overall record sits firmly in favour of the Scorchers, with 13 wins to the Sixers’ nine.

The pair have met four times in BBL finals, with the leger sitting at 2-2, and recent history also suggests that the Scorchers’ chances of victory in the final could be high, should they face the Sixers.

In BBL|11, the Scorchers have won all three of their games against the Sixers, including Saturday night’s Qualifier fixture.

If the series of results between the sides in BBL|10 is anything to go by, the Scorchers’ chances of winning a fourth final could be their strongest, should the Sixers be their opponents.

The BBL|11 Final will take place at Marvel Stadium, the Scorchers’ nominated home ground while the BBL season is unable to take place in Western Australia due to border and quarantine requirements.

The Scorchers have won all four of their matches at the ground in BBL|11, and an additional two that they played there in BBL|10. The Scorchers’ overall record at the ground speaks for itself – they have lost just one game, and won ten.

The Sixers’ record is slightly less favourable, but is still in the positive – they have won four games and lost three, while the Strikers (4-2) boast a similar record.

The Thunder are the least successful of any of the Scorchers’ potential opponents, with just two wins from their BBL games at Marvel Stadium, one of which was in BBL|11.

The statistics are clear – win the toss and bat.

Seven of the ten teams who have batted first at Marvel Stadium in BBL|11 have gone on to win the game, including the Scorchers on Saturday night.

Their win over the Sixers was their second win batting first at Marvel Stadium, the other against the Melbourne Renegades.

Batting first in BBL|11, the Scorchers’ record also speaks for itself – nine of the 11 games in which they’ve batted first have eventuated in a Scorchers win.

They have also put on an average score of 170 every time they’ve batted first, with that number increasing to 179 in the games they’ve won.

The Scorchers’ ability to pile on a commanding first-innings score has seen them score 180 or more in six of their first innings in BBL|11, a number that’s hard to ignore.

Who is the Scorchers’ ideal BBL Final match-up?

Ideally, the Scorchers would want to bat first again, but their record at Marvel Stadium – and for BBL|11 – suggests that they might be hard to beat regardless.