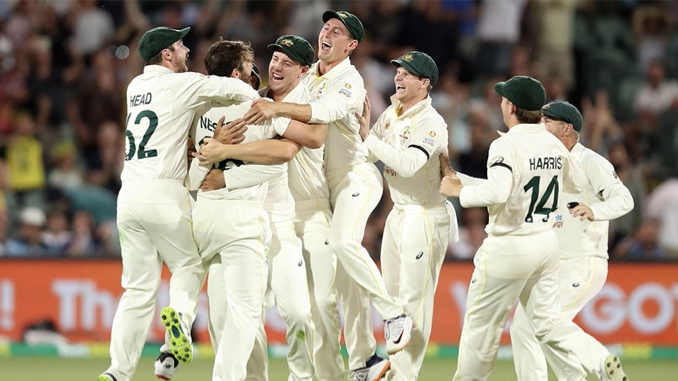 The second Ashes test is firmly in Australia's favour after a pivotal day two from Adelaide Oval. These were the moments that mattered.

After day one of the second Ashes test saw Australia wrestle back momentum towards the end of the day, the hosts continued their dominance as day two drew on.

A ton to Marnus Labuschagne, a brilliant innings from Steve Smith, and some fireworks with both bat and ball from the quicks were the day’s highlights for Australia, while England’s no-ball woes continued as a familiar face was finally among the wickets again for the visitors.

Here are the moments that mattered from day two at the Adelaide Oval.

Not long after Marnus Labuschagne duly went on to his sixth test century and first against England after five previous half-centuries, the tourists were celebrating his dismissal when Ollie Robinson got the ball in his hand for the first time on day two.

Then the replay flashed up on the screen to show that the English quick had overstepped, thus handing Marnus yet another life in his innings of luck and good fortune.

After being dropped twice by wicketkeeper Jos Buttler on day one, and having ridden his luck through some evasive action facing England’s loaded pace attack, Robinson’s error was yet another still frame image for Australian fans to keep in their catalogue of famous English no-balls down under.

It was the second time this series that England had claimed a wicket off a ball that was later deemed a no-ball.

Ian Botham was scathing on Channel 7 about the latest No ball wicket.

“You do not need to push the line like this. It’s ridiculous. You should be half and half at most.

“The problem is, these guys bowl in the nets from 16,17 yards and when they come out here, they get it wrong. This is not the first time in the test series [it’s happened], and if they keep pushing the line, it won’t be the last.”

Robinson accounted for Labuschagne in his next over, trapping him LBW for 103.

After a bad day one with the ball and in the field, and facing the prospect of a 38-degree day in the field with eight wickets to take, there weren’t too many rosy pictures being painted for England.

After Robinson overstepped, but finally got his man in Labuschagne, Australia looked to press on with as many runs as it could before the lights came on and it could insert England into bat.

But as the visitors needed to, they managed to find a way to take wickets to split the morning session, taking three wickets for 81 runs, not letting the Australians get too far ahead of the game at the first break.

Skipper Joe Root, the side’s only slow and spin option for this Test match got one through Travis Head, before the next over when Ben Stokes bowled Cameron Green with a magnificent ball that hit the top of off stump.

It’s been 1,442 days since his last, but James Anderson is back in the wickets column in Ashes cricket. It took until his 26th over with the second old ball, but the 39-year-old veteran made a timely breakthrough on the second evening, trapping Steve Smith in front as he was eyeing a 12th Ashes century.

Removed for a very Steve Smith-like 93, filled with all the regular funky leaves and extravagant shots, the stand-in skipper missed a regulation Anderson in-swinger and was given out by umpire Rod Tucker on the field.

Ball tracking had the ball just inside the line of off stump, but hitting the stumps, which meant that Smith was sent on his way after a brilliant partnership with Alex Carey.

Anderson then picked up Carey the next over, who departed for a well-made 51, his maiden half-century in Test cricket.

Ashes: Jos Buttler ‘hurt’ as he and England can’t help but fall into a hole

Maxwell and Philippe show the key to BBL revival

Carey’s departure brought debutant Michael Neser to the crease, with the Aussies building a comfortable first innings total at 7/390.

From there it was all fun and games for the Australian tail-enders, as Neser and Mitchell Starc added 58 for the eighth wicket in the space of 50 balls.

Neser starred with a cameo of 35 from 24 balls, taking 16 from one Chris Woakes over as he finished with five fours and a six in his first test innings.

Starc held down the opposite end, finishing on 39* with five boundaries as Jhye Richardson hit nine from his first two balls, including a huge six, before being dismissed on his third.

The trio added 83 runs to the Aussie total between them, as the hosts declared at 9/473 to send England in under the Adelaide Oval lights.

England openers Haseeb Hameed and Rory Burns got off to a flyer, hitting seven from Mitchell Starc’s first over. From there it was little joy for the tourists, as Jhye Richardson made himself known with a tremendous first over, beating the bat of Hameed four times.

Mitchell Starc then struck with the first ball of his second over, removing Burns for the second time in the series to a sharp catch from Steve Smith at slip.

In direct contrast to his long wait for a debut, Michael Neser’s wait for a first test wicket was minimal, striking with his second ball as Hameed chipped a catch to Starc at mid-on.

Richardson and Neser continued to threaten, before an untimely lightning strike and a sprinkle of rain forced the umpires to abandon play on day two, with England 2/17.