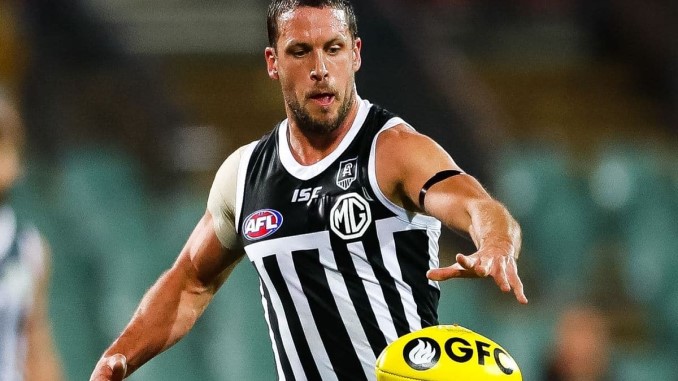 Port Adelaide great Travis Boak celebrates his 300th game on Friday night against Collingwood in what is a huge milestone for the midfielder.

Port Adelaide champion Travis Boak will play his 300th AFL game this Friday night against Collingwood. The 32-year-old will bring up the milestone that not many AFL footballers have achieved.

Since being at the club, the former pick five in the 2006 AFL draft has been a key staple in the Port Adelaide side. Former Port Adelaide defender and teammate Alipate Carlile spoke exclusively with The Inner Sanctum about Port’s midfield maestro and gave his impressions of a young Travis Boak when he first arrived at Alberton.

“He has always been an unbelievably hard worker,” Carlile said.

“It’s a real credit to him to stick it out this long. It is amazing what he has been able to achieve, first as a player but also a leader.

“Everything he does off the field for the club and the community in general. He is a real sort of knockabout guy. Not much fazes him too much which is really cool, and he is always measured in his responses and stuff like that.

“I just remember him just rocking up, working his ass off. Just how much skill, athleticism, and time he had with the footy was something that always stood out to me.”

It was not all plain sailing for the former captain, however. In 2012 there was a serious push from Geelong to lure the midfielder back home to Victoria.

Despite all the attention and hype that came with a potential move, Boak proved he was a loyal servant of the Port Adelaide Football Club.

He chose to stay during arguably the club’s toughest time. Carlile believes that the deciding factor for the midfielder to pledge his future at Alberton was the great people Boak met at the club.

“I think the real close friendships he had at the club,” Carlile said.

“Especially with Robbie Gray, Paul Stewart and Westy [Justin Westhoff] and guys like that. He felt like this was sort of a second home for him.

“I know that his family miss him immensely, they all wanted him to come home. But I think deep down that Port Adelaide was always going to be a place where he fell in love. Especially with the connections he had made.”

Being in arguably career-best form over the last two seasons, Boak has gone from strength to strength.

The Power veteran had put up massive numbers in the heart of the midfield for years, despite not being the club’s captain anymore with defender Tom Jonas now wearing Port’s number one jumper.

Despite this however, Carlile still sees Boak as a leader on the field and attributes that to the way he carries himself, both on and off the field.

“He has worked on his leadership and from the start and always wanted to get the best out of himself,” said Carlile.

“He really set an example. Both on the track and off the field with his dedication, professionalism and what he has been able to do to transform himself.

“He would probably admit to himself that he is starting to slow down a bit with his body and stuff like that and he took it into his own hands to turn that around.

“What he has been able to produce over the last two to three years has been absolutely outstanding.

“I think he has played the best footy of his career and he is still a leader around the group which is awesome to see.”

Playing alongside Boak for the best part of a decade, Carlile has seen his fair share of ups and downs. However, one moment with the former captain sticks out above all others.

It came after Port Adelaide’s horror 2012 season and Carlile made it known that the midfielder had to step up and take the club forward. A quiet chat that proved decisive.

“Ah coming in he was pretty cocky, pretty confident but he has always been really relaxed,” Carlile said.

“Probably my favourite memory would be us sitting down as a group. There would have been about 10 of us in the offseason and we had enough of the losing and the pretty shocking performances. Especially during that 2012 period.

“I said to him that he needed to step up and become captain at some stage. To just watch him evolve over his career, to push the limits with everything he does.

“I don’t really have a specific highlight, honestly his whole career has been amazing.

“He has been awesome to watch, especially him and Robbie [Gray], what they have been able to achieve together and hopefully they get the ultimate success.”

‘You have to come and watch us’: Northern Bullants connection unbreakable after third win straight

Dunstan Luke-warm no more as Saints midfield heats up

With Boak in line to play his 300th AFL game, a lot has to go right for a player to reach the impressive milestone. Plenty of luck with injuries, play at a high enough level to stay in the system, along with looking after their body.

It is something that Boak does better than anyone else in the competition. HIS efforts did not go unnoticed by his teammates.

“He is an absolute animal,” Carlile said.

“Like his gym work, now his diet, all that sort of stuff, just meticulous with his preparation. He does not leave anything to chance at any stage in his career which is a real credit to him.

“Even as a leader, you just see him evolve with the role. He had a lot of help with Dom Cassisi and guys like that and he had a fair bit of support and he wanted to lead in his own way, and he did it really well.

“He never put himself in situations that made him uncomfortable, but he has always been a real confident leader as well.”

With the incredible achievement of playing 300 games, naturally, fans of Port Adelaide will be thinking long and hard if Boak is the best to ever wear the jumper.

His loyalty, passion, and leadership have been a beacon of light for the entire Port Adelaide community. Carlile narrowed it down to three players, with Travis Boak high on the list with two other Power greats.

“I would have him at least probably one, two, or three to be honest,” Carlile said.

“I know we have had some amazing players like Tredders [Warren Tredrea] is probably one of the standouts in my time at the footy club.

“Anyone before that I am not really sure as I didn’t watch Port Adelaide before I got drafted. But Tredders would be up there as well, Robbie Gray probably the top three for my mind.

“But it would be a toss-up for those three because you could make an argument for all of them.

“What he [Boak] has been able to achieve, both personally but also he doesn’t get enough credit for what he was able to be. A part of the team to turn it around in 2013 and I think it will go down as one of his greatest[achievements] for me personally as a team, I know we were just so thankful to have him around. 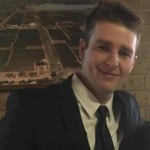 Adam is a freelance writer and has covered the NFL, AFL and the English Premier League for various sites. He currently an NFL analyst for Sportskeeda and covers Arsenal for FanSided.