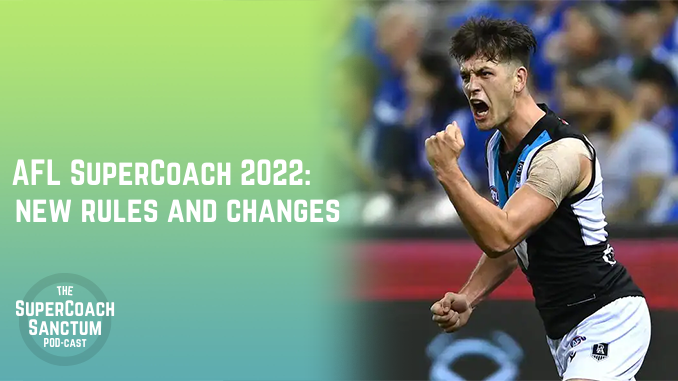 Zak Butters could benefit from one of the AFL SuperCoach 2022 rule changes. Image: afl.com.au

AFL SuperCoach is back for another year in 2022, and so is the SuperCoach Sanctum POD-cast!

With team selection now open for this season, there are a few changes to how AFL SuperCoach will operate in 2022.

We’re here to break them down for you, so you’re ready to tackle this season of SuperCoach head-on.

One of the biggest changes to AFL SuperCoach in 2022 will be the number of trades, which has been boosted from 30 to 35.

The trade cap will still sit at two trades per round, with three in the bye rounds, but for an extra element of strategy and flexibility, a new feature has been added – trade boosts.

SuperCoaches will be given the option to use five of these ‘trade boosts’, an additional trade that can be used in any given round.

Only one can be used per round, however, and the trade boosts come out of the total of 35.

Trade boosts can be used at your discretion, using all, some, or none of the available five.

Another massive change to trading for the 2022 SuperCoach season involves the ability to adjust and edit trades after lockout commences.

This is a huge boost for SuperCoaches who have been stung by late outs or pending team selections – if the traded-in player is named as a late out or misses selection, you’ll now have the ability to bring in a different player who fits under the available salary.

It’s also a boost for picky and indecisive SuperCoaches – you’ll have the ability to adjust any trade until the player you’re trading in is locked out.

Hopefully the 2022 season isn’t as COVID-affected as the past two, but this is an especially handy change in the context of potential late changes due to COVID-19.

It seems flexibility is a key theme behind the changes to SuperCoach in 2022, and it’s set to extend to team selection and player positions.

At rounds six, 12, and 18 during the season, Champion Data will re-evaluate players’ positions and in-game roles, and some players will subsequently be given dual-position status.

The obvious example of this from 2021 is Jack Ziebell, who finished the season as one of the most popular forward selections, despite playing at full-back for the duration of the season.

While Ziebell remained forward-only for the entire season, players in similar situations in 2022 will be given DPP eligibility in 2022 – think someone like Zak Butters or Jaidyn Stephenson, both currently forward-only, who could gain FWD-MID eligibility with consistent midfield minutes across the season.

SuperCoach is something best enjoyed with a group of friends or colleagues, and league creation is set to go to a new level in 2022.

Updates to leagues in 2022 include the ability to create private leagues consisting of between six and 20 teams, and leagues can be created or joined at any point during the season.

Further flexibility allows the operation of leagues to be customised as well – you’ll be able to select the start round and finals system of a league when creating it, and leagues will be able to be ranked by either percentage or overall score.

So got a big group of mates or a big workplace? You’ve got plenty of wiggle room for your AFL SuperCoach league in 2022.

Keen to test out a strategy for your draft league? There are now mock drafts available for the 2022 season, available for all league types and configurations.

Squad sizes and team layout in draft leagues will also be completely customisable. The number of players across each position and on the bench can be adjusted to allow for any configuration.

You’ll also have the opportunity to adjust when finals in your league take place – regardless of the length of your season.

For SuperCoach Plus subscribers, there are a few new features when it comes to trading:

That’s what’s new for AFL SuperCoach in 2022, there’s plenty to be excited about!

Stay tuned as the season draws closer for more SuperCoach coverage, and keep an ear out for the SuperCoach Sanctum POD-cast in 2022!

Join our SuperCoach Sanctum POD-cast group for AFL SuperCoach in 2022!