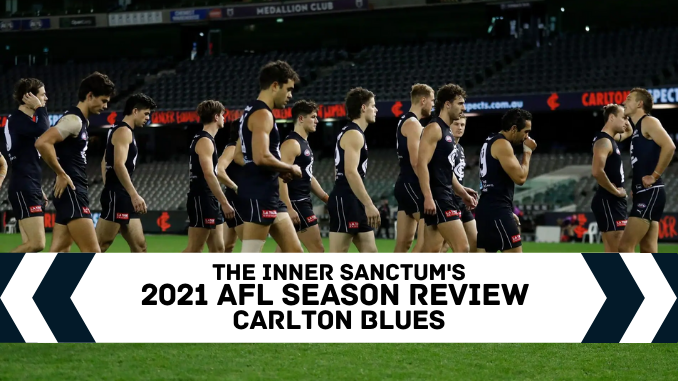 Carlton players walk from the field after a late-season loss to the Gold Coast Suns. Image: carltonfc.com.au

It was another season of little progress for Carlton, 2021 yielding signs of promise but ultimately a predictable finish, ending in the dismissal of yet another senior coach

The 2021 season for Carlton was perhaps as predictable as it could be – some impressive wins, some disappointing losses, a mid-table ladder finish, and the win-loss ledger ultimately falling in favour of mediocrity.

With some big-name off-season recruits added to a team brimming with talent, the Blues at times looked like they were well on their way to a complete side, with some scintillating and commanding football played in patches throughout the season.

The beginning of the season saw the Blues display this brand of football in glimpses, threatening to deliver a complete performance but too often failing to take full grasp of the momentum they had.

Many would have called the Blues’ season done by the bye, a loss to a heavily depleted West Coast Eagles side seemingly an indicator that the Blues weren’t able to match it when needed.

Yet somehow they stayed afloat with wins in the second half of the season keeping the pulse flickering, but ultimately failed again at key moments late in the season to take the next step the club and its stakeholders so desperately want and need.

The Blues’ forward line, which has in recent history been their weakest asset, finally found its focal point in 2021, with Harry McKay taking home the Coleman Medal after leading the league with 58 goals.

McKay, for most of the season, was the lone big man in the Blues forward 50 as they battled injuries to their tall stocks all throughout the year. This was aided later in the season slightly when Charlie Curnow returned from a two-season injury hiatus.

Carlton did though find another avenue to goal through Matt Owies, who had been made to bide his time in Carlton’s reserves side, made his 2021 debut with a bang against Essendon, booting three goals in an impressive individual display. Owies finished the season with 15 goals from his 13 games and is poised to win a new contract to improve on his breakout season.

The Blues medium and small forward stocks were tested late when Josh Honey returned to the Blues’ best 22 late in the season after debuting in 2020, and Corey Durdin made his AFL debut, both showing plenty of promise as lively pressure forwards for Blues fans to look forward to watching.

What more is there to be said about Sam Walsh that hasn’t already been said? The 21-year-old lit up the stage consistently for the Blues in 2021, elevating himself to the clear status as the club’s number one midfielder.

The 21-year-old was one of very few Blues who could hold his head high each week, with plenty of prolific performances despite poor team displays likely to see him poll highly in the Brownlow Medal later in September. Walsh’s brilliant season was also acknowledged as he was named on a wing in the All-Australian team, and the captain of the AFLPA’s 22under22 side.

Behind wooden spooners North Melbourne, the Blues conceded the second-most points in the league. While Jacob Weitering was named in the All-Australian squad of 40 and his key defensive partner Liam Jones arguably a contender for the squad, it’s an indictment on the Blues who too often provided the opposition with too many alternate avenues to goal.

This was no more evident than in Carlton’s Round 22 clash against Port Adelaide, where after a 23-point lead in the second quarter the Blues conceded 19 consecutive goals and goals to 12 players in total, a horrific result for the Blues.

Similarly, this defence loaned itself to conceding quick goals at the conclusion of quarters, as well as momentum swings of five or more goals, something for which David Teague’s coaching tenure at the Blues will become infamous for as they remained unable to stop the run of goals from the opposition.

David Teague’s game-plan also left the Blues in plenty of awkward situations. In instances such as when Liam Stocker, a natural midfielder, was matched up on Liam Ryan of West Coast, who booted four goals in the game.

The week prior, Levi Casboult was named as a late inclusion to face Sydney, despite the evidently wet conditions and the Blues needing a smaller lineup. This was a call Teague later admitted to regretting, and one that had a potentially substantial impact on the game.

Particularly late in the season, the Blues’ team selections showed little responsiveness after losses such as those to North Melbourne, Gold Coast, and Port Adelaide. The former two, in particular, games in which the Blues were favourites to win, saw just two and zero omissions made, albeit the Blues suffered five injuries following their loss to the Gold Coast.

Another team selection difficulty in the final rounds of the season, when there was little to salvage, was the lack of inclusion for Sam Petrevski-Seton, named the medical sub against Port Adelaide and omitted altogether against GWS. After a notable improvement in form, Paddy Dow was also dropped to be named medical sub against GWS.

The undying highlights for Carlton in season 2021 were none other than the three Blues who were named in the All-Australian squad of 40.

Arguably one of the biggest breakout stars of the competition in 2021, Harry McKay was not only a clear standout for the Blues but a standout in the competition’s goalkicking leaderboard, taking home the Coleman Medal.

Remarkably, McKay missed three whole games and was subbed out in the first quarter of another, but still finished four goals ahead of Geelong’s Tom Hawkins on 58 goals from his 19 games in 2021.

His season was highlighted by seven hauls of four or more goals – including a seven-goal haul against Fremantle and a six-goal bag against Essendon, while he recorded the highest individual goal tally for a Carlton player since Brendon Fevola in 2009.

Despite the fluctuating form and fitness of skipper Patrick Cripps, Sam Walsh in just his third season stamped his authority as Carlton’s number one midfielder and one of the competition’s best at the age of just 21.

Walsh averaged 29.8 disposals throughout the season and on plenty of occasions displayed his damaging capabilities, booting 12 goals across the season also.

Carlton’s third All-Australian nominee – and perhaps the league’s most unlucky player to miss selection in the final 22 – was Jacob Weitering. Weitering captained the Blues on a couple of occasions in 2021, but his leadership in all situations from the backline was immense.

Sam Rowe: ‘AFL players diagnosed with testicular cancer is a reflection of society’

Opinion: Thanks for your time David. It’s not you, it’s us

A bond greater than footy: Shane O’Sullivan pays tribute to ‘the other son I didn’t have’

Carlton fans had every right to be up and about after round three, where the Blues stormed to a dominant 45-point win over the Dockers.

The game was headlined by a commanding seven-goal, five-behind performance from eventual Coleman Medallist Harry McKay, while plenty of other Blues starred in a clinical team performance.

It was a tantalising display of the capabilities of the 2021 Carlton side and laid a marker down early in the season of just what the Blues could achieve.

Surprisingly, after Round 18 the Blues were still in the finals race, with games against North Melbourne, St Kilda, Gold Coast, Port Adelaide and GWS to go, many considered four of the last five weeks winnable, giving the Blues the perfect chance to sneak into finals.

However, instead of continuing the momentum after an emotional and stirring comeback against Collingwood in Round 18, the Blues dished up an insipid performance to lose by 39 points to a North Melbourne which would prove to be one of the final nails in Carlton’s season.

After they led by two points at halftime, the Blues were kept scoreless in the third quarter as the Kangaroos ran riot at Marvel Stadium, kicking seven goals in a row on their way to a commanding 39 point win.

Then after a rousing win against St Kilda the following week, the Blues faced a Gold Coast side that received a 98-point drubbing at the hands of Melbourne.

A chance to establish its standing within the echelon of teams vying for a place in the top eight would ultimately be an insufficient motivator for the Blues.

Again, producing a soulless and spiritless performance as they squandered yet another opportunity to show the rest of the league – and their own fans alike – that it was worthy of a position in the top eight.

It would seem that the future of Sam Petrevski-Seton lies somewhere other than Carlton, the former pick five falling out of favour towards the end of the season.

A make-or-break year for former top-ten picks Paddy Dow and Lochie O’Brien, in which the jury is still out, could see one or both moved on, while the likes of Will Setterfield, Matthew Cottrell, and Jack Newnes may also have played their last games in navy blue after coming in and out of the best 22 throughout the season.

The storied careers of Eddie Betts and Marc Murphy also came to an end with the pair retiring, while Levi Casboult also played his final game for the Blues.

Where do you start? There’s plenty to do.

Following Thursday’s sacking of David Teague, the Blues’ are searching for a new senior coach, their fifth coach since 2012.

Aside from the head coach position, however, there’s expected to be a mass off-field shake-up in the wake of the much-publicised external review, which has already seen a number of assistant coaching positions vacated and with more changes expected to follow in the coming months.

It’s no stretch of the imagination to say that the Blues simultaneously overachieved and underperformed in 2021, with glimpses of brilliance at points – and ones that scarcely lasted for entire games at that – foreshadowing the potential of this Carlton side has.

Aside from that, however, the big picture of the Blues’ season – compared to expectations and the potential they showed is an ultimately disappointing season in a year that was meant to be significantly more fruitful than what it delivered.

There’s plenty to work with for the Blues’ 2022 coach – whoever it is – but also plenty of work to do.